Oh hell no, I ain’t paying that!! My girlfriend wanted me to take her to Santorini for a week for our anniversary and until I heard the 300 euros ($455) per night cost of a simple room, I was also looking forward to relaxing on a beautiful Greek island.

The room price would have hurt me 2100 euros, or $3,188 for a week. Boy do women know how to inflict financial pain! I didn’t realize what I’d agreed to! I could buy a return ticket to Melbourne from Athens for less than that. If I was staying in a Four Seasons hotel or resort, that would be be a great price, but given that it was a simple, small family-owned hotel, the price was insane.

So I wanted to make my karthoula happy, and I also wanted to have a good time, but I didn’t want to be one of those idiot tourists that accept the first price they are given. There had to be a way to enjoy Santorini without being robbed at gunpoint. There definitely is, and I’m about to show you how. I have split the costs down according to the five main activities.

GETTING TO GREECE SERIOUSLY CHEAP

Many people reading this are not already in Greece, but in faraway lands such as Australia and the U.S. With that in mind, I will show you how to make huge savings before even landing in Greece. If you are already in Greece, I suggest you skip down to the next part.

Most people these days know that it is a waste of money to go through travel agents, because they also need to make a commission, which means that prices they offer are usually higher than what you will find on the Internet. This is only true if you let the travel agents control you as opposed to you controlling them. What do I mean by that?

If you walk straight into a travel agent’s office and ask for a price from Melbourne to Athens, they will give you the route that is fastest for them to find, with the least amount of effort, and the maximum amount of commission.

The better way to approach this is by firstly using a flight search engine on the web. I recommend staying away from the more popular and well known ones like Kayak and Expedia  because they also take a huge commission and seem to enjoy treating customers like fools. I recommend you start with something like Momondo or Skyscanner. The price differences can be huge. If you don’t believe me, try comparing Momondo and Skyscanner to Kayak or Expedia and see what comes up.

Once you have received the cheapest price possible from a search engine like Skyscanner, I suggest you print it out and visit three travel agents. In shopping centers they are usually next door to each other so it shouldn’t be too hard. 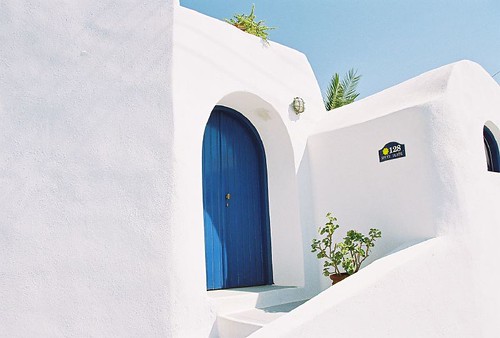 Tell them you have looked at prices on the Internet and would like to hear what is the best price that they can offer you. They will try to pressure you to find out what price you found and you will tell them, “Well, actually I would like to just know what is the cheapest price you can offer me and then I will compare.” Do not give them the price. They will only undercut it by the minimum possible. If they don’t know the price they will do their best.

Once they offer you a price, they will refuse to print it (unless they are new) out because they don’t want you to take it to the next travel agent and get a better price. It is illegal of course for the travel agents to stifle competition but they do it anyway.

Tell them that you want to go with your partner, but she will not take you seriously unless you show her a real quote. Usually at this point they relent and print it out for you. If not, it’s no problem, just get them to write down the figure on a piece of paper.

You then go to the next travel agent and tell him the same thing you just told this guy. You will then have three quotes (or four if you are really hardcore!). You take the cheapest quote to the travel agent that seemed the most flexible and open and you ask them to beat it.

And there you have it – using the competition of the marketplace to get the best price for the consumer.

By the way, if you are interested in other ways of finding seriously flights, check out Top 5 Unique Tricks for Flying Cheap for the Hardcore Budget Traveller.

Most people already know that taking a ferry to the islands is way way cheaper than flying. A return ticket by ferry can be less than a one way flight. Tickets start from 30 euros ($38.58) one way (depending on the season), and Blue Star Ferries seem to have the best prices.  I recommend using a ferry search engine that compares all of the different companies together like Petas but there are many others also.

What most people do not consider is the time of arrival and the extra cost of getting from the port to your hotel and back in the middle of the night. Arriving at 2 a.m. or so might seem cheap, but if the hotel is not picking you up for free and you are forced to catch a taxi in the middle of the night, do not expect to pay what you would pay if you were catching a taxi during the day. And, if your hotel is within walking distance of a bus stop, the public coaches/buses are much cheaper than a taxi. 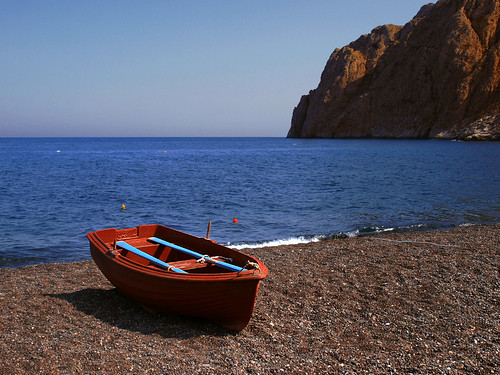 This is where most of your money would normally be spent. Luckily this is not a ‘normal’ travel article and I’m about to tell you how to save BIG.

So the first quote I got from the Internet during peak tourist season was the 300 euros per night for a simple room.  After searching some more I did find some better priced ones, but they were not radically different. What I realized was that I was using a search engine that was getting most of the Google traffic when people typed in Santorini Hotels. And then I thought, what about using a search engine aimed at a younger crowd with a smaller budget, that didn’t get anywhere near as much traffic from Google?

The results were radically different and I was still getting what I wanted,  a clean, private room with a double bed, kitchenette and bathroom within walking distance of one of Santorini’s world famous beautiful beaches. The hotel even had its own swimming pool.

Why the huge difference? Because the mainstream hotel search engines get all the Internet traffic and it is in their interests to show you only the most expensive hotels as their commission is larger. If they were to show the cheaper hotels, their commission would be very small – and given that they receive 90% of the traffic, why should they? If you avoid peak tourist season, and schedule your trip for end of May, you will get even better prices.

By the way, are you enjoying the article? Why not join me on Facebook and be kept up to date with the latest amazing travel bargains and articles?

By far, the cheapest way to get around Santorini is using the KTEL public bus. The journeys are cheap, costing approximately two euros ($2.60) one way – bargain! You can check out the routes, timetables and costs here. It is also the most environmentally responsible.

The buses are great for getting you from town to town, but sometimes you want to go off the beaten track, and the cheapest way to do that in terms of vehicle hiring and petrol costs is by hiring an ATV (a four wheel bike). For as little as 20 euros ($26) per day, you can hire one of these beauties and go anywhere you want to on the island. The price is the same if you want to hire a scooter.

You just need a standard driver’s license from any country to hire one of these. You do not need a special permit. 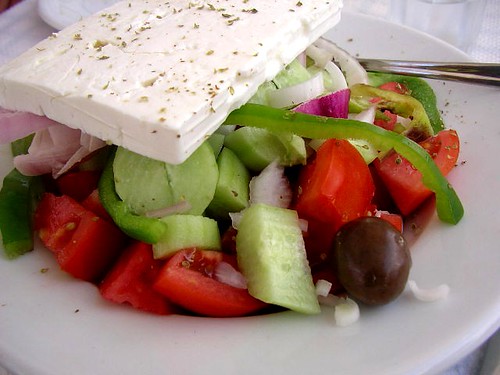 The best tip I can give you here in terms of eating delicious food at decent prices is to avoid the town of Fira, the most famous part of the island with all the beautiful houses you see in movies. It’s great for a visit. But once you are done visiting, get yourself out of there before you start getting hungry. I say this because as soon as you get hungry the smell of the mouth-watering cuisine will be too much to resist. And so will the insane prices.

Stick to taverns outside of Fira, where the prices are about a third of what you can expect to pay in that town. A delicious meal outside of Fira on average costs seven euros ($9) and the service is much better. In Fira you can expect to be taken for granted and ripped off. If you really want to go budget, most hotel rooms have a kitchenette where you can prepare your own basic food.

If you are interested in more articles such as this, you can visit a travel site I write for along with some of my friends who are also world travellers – backpackingonthecheap.

Images are thanks to the following artists in respective order Stuck in Customs, Jean Spector, Shelby PDX, hozinja, bleu celt

Greece from Home: Discover Country’s Beauty and Culture From Afar

The Best Time-Consuming Greek Moussaka Twists You Should Try At Home...

Why Greece Succeeded as Italy, Spain Failed to Tackle Coronavirus

The Best Time-Consuming Greek Moussaka Twists You Should Try At Home...